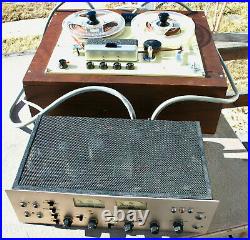 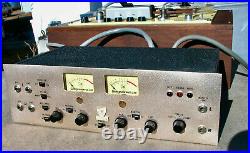 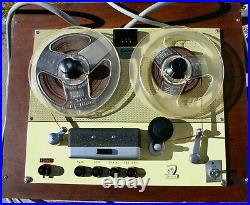 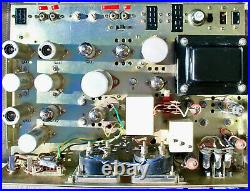 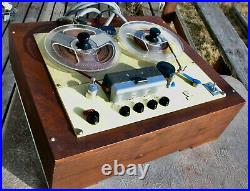 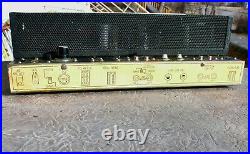 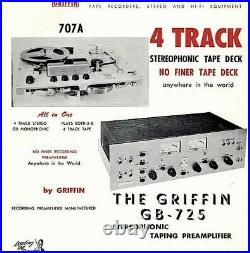 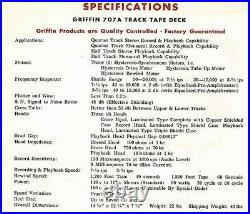 Vintage Tube Preamplifier and Tape Deck. Tubes: 5- 12AX7, 3- 12AU7 & 1- 6X4 rectifier. This Pre-Amp powers up and the Tape machine Plays, Stops, Reverses, and Fast Forwards as it should. It produced no music as after powering up, the VU meters slowly rise until they are pegged. It is 60 to 70 years old, so it will need attention. It’s been kept in cool dry, climate controlled storage. These were made in the late 1950s and early 1960s for the professional broadcast industry by Denon of Japan, one of the world’s premier audio equipment manufacturers of the time, rivaling Ampex in the US and EMI (Abbey Road) in England. Griffin was the name Denon chose for the North American market. These two parts were made to be installed into broadcast console and large desk audio environments at radio or TV stations, so they had to either be “rack” installed by a technician, or if the client desired to have the two parts in a single, transportable setup, they would need to have a custom cabinet of some sort built. See my other auctions for similar items. I pack very well, using plenty of cushioning in strong boxes, and even double box with fragile items. The item “GRIFFIN Stereo PRE-AMP & 4 TRACK REELREEL TAPE RECORDER/PLAYER 725 &707 Denon” is in sale since Saturday, March 6, 2021. This item is in the category “Consumer Electronics\Vintage Electronics\Vintage Audio & Video\Vintage Amplifiers & Tube Amps”. The seller is “stevesart_parts” and is located in Rapid City, South Dakota. This item can be shipped worldwide.