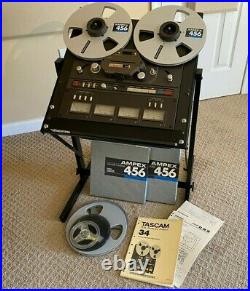 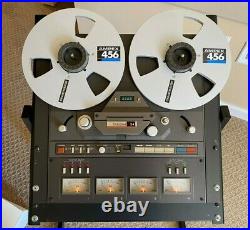 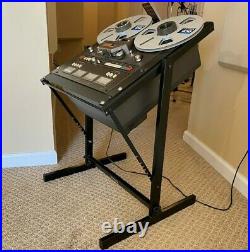 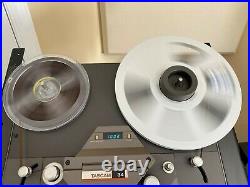 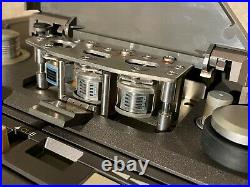 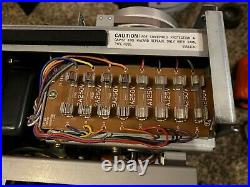 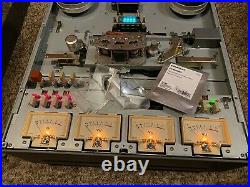 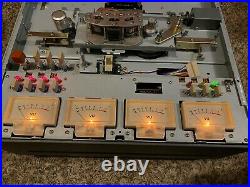 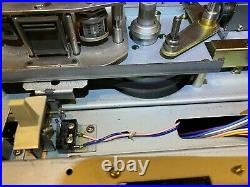 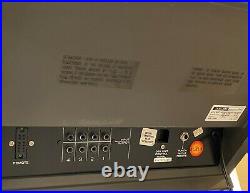 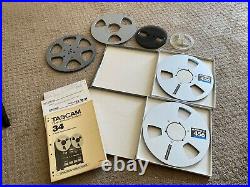 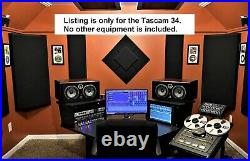 I realized after listing that I. Heads after running the tests. I updated a photo showing clean heads. For sale is my Tascam 34 professional reel to reel tape recorder in excellent cosmetic and functional condition. The unit is fully functional, including all lights, buttons, electronics and mechanicals. All original pieces are accounted for, including the original Tascam 34 badge, which is commonly missing from these units. I did a recent thorough internal cleaning and testing. I replaced all four 2 Amp fuses as well as replaced all four VU meter fuse type lamps with radio shack halogen 12 volt mini bulbs. I inspected the belt which is still in good condition. The heads are in very good condition as well, as is the capstan and pinch roller. This unit has been rack mounted in my professional studio since 2008, as can be seen in the last photograph. Unit is virtually unblemished. This unit has a very cool story to go along with it. See last two paragraphs if you are interested in that history. The unit will include. Two metal large hub Ampex 10 take up reels with their boxes. One plastic large hub 10 take up reel. One plastic small hub 10 take up reel. One SONY brand type 7 small hub take up reel. One Scotch type 5 small hub take up reel. Two original Tascam large hub reel adapters. The original Operation Maintenance guide with a Tascam supplied supplement page. Includes all rack screws to reassemble as seen in the photos. This unit was gifted to me by studio & label owner, my late GREAT friend, Joltin’ Jim McCoy. There is a sticker on the upper left corner of the unit showing it’s last service date of March 13 1997. Every transfer has sounded great. I have never recorded with it but I tested each input, output, output select and function select today to tape. Every input recorded to tape and every output sent signal to my interface perfectly. Each VU meter operated perfectly as well. Jim McCoy had a long career in the country music business, recording on a major Nashville label, traveling the country performing, a career as a country DJ, owning & operating his own record label (Winchester Records,) and founder of The West Virginia Music Hall of Fame. One thing he is most known for is discovering the talents of a young Virginia Patterson Hensley Patsy Cline. Jim invited her to perform on his weekly radio show WINC in Winchester VA. Before she would go on to fame, Jim was Patsy’s first guitar player. I became friends with Jim in 2004 when he asked me to help him build and operate a recording studio at his restaurant and lounge “The Troubadour” in Berkeley Springs West VA. Although I had a full time studio job, I helped him design, build and operate his studio during midnight shifts from 2005 until 2016 when he sadly passed away. The first time I walked into his studio he had rooms filled with old analog equipment. I remember telling him that if he wanted me to build and run it, my experiences and knowledge lies best with digital systems. The new owner of this recorder can say that they own a recorder, that was owned by Joltin’ Jim McCoy, local country music legend and the man who discovered Patsy Cline. The item “TASCAM 34 Reel to Reel 4-track 1/4 TAPE MACHINE RECORDER. Excellent Cool story” is in sale since Friday, March 5, 2021. This item is in the category “Consumer Electronics\Vintage Electronics\Vintage Audio & Video\Reel-to-Reel Tape Recorders”. The seller is “amys5704″ and is located in Edinburg, Virginia. This item can be shipped to United States.