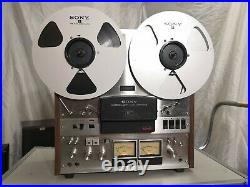 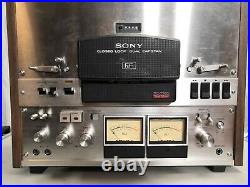 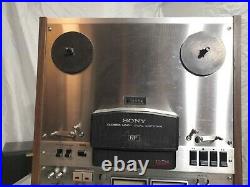 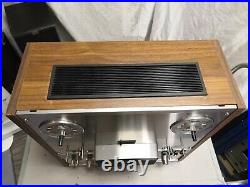 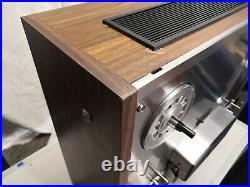 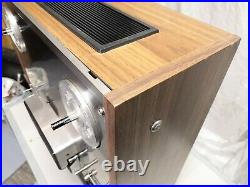 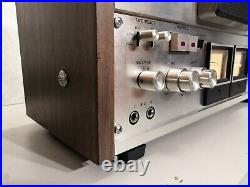 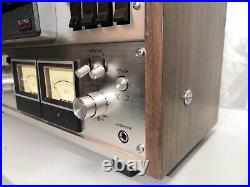 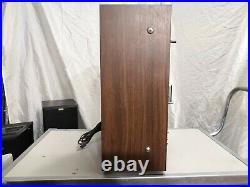 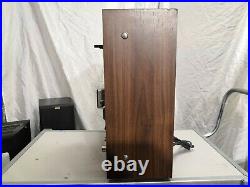 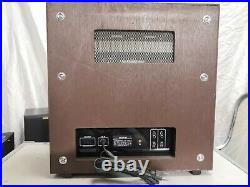 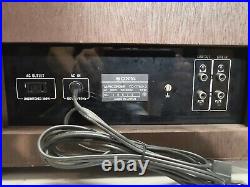 Complete maintenance was made in August 2020. Now all functions work as expected. The tape recorder was brought from Japan, so it has a power supply of 100 volts. It can also work in the USA and other countries where the voltage in the network is 100-120 Volts. In those countries where the mains voltage is 220-240 volts, a voltage converter is included. It is possible to remake this tape recorder for a voltage of 220-240 volts. The work will take 1-2 days and then a power converter will not be needed in countries where the voltage in the network is 220-240 Volts. The kit includes original Sony NAB adapters + spacers. Reels are not for sale. Return is not accepted. You must understand me. ¥138,000 (released in 1973). The Secloff series tape deck which adopted three of a servo motor, a closed loop dual capstan system, and F&F head + FET amplifier. It has a 3-head configuration of 2-track type erasing/recording/playback. In addition, it has a 2-speed design of 38 cm/s and 19 cm/s with 3 motors that can use up to No. The closed loop dual capstan system is adopted. In this method, the head part is arranged in the center and the tape is pressure bonded with two sets of capstans and pinch rollers to eliminate the effects of tape vibration and tension unevenness in the loop. Thereby, wow and flutter, FM modulation noise, etc. A servo motor is used for the capstan drive motor. Stable rotation is achieved by controlling the ultra-low vibration motor with a servo amplifier to maintain a constant rotation speed. The F&F head which finished with not only the core part but the guard part with ferrite is adopted as a head, and the head life is improved to about 200 times of the former. FET is used for the head amplifier first rank. Furthermore, the characteristic is improved by adopting the direct coupling system which connected the F&F head directly. By adopting the logical control, the feather touch function switch is realized. It detects the rotation state of the reel axis, confirms the stop, and then moves to the play, so it becomes a quick play at the time of slow rotation and saves time. There is no accident even if you press other buttons during high-speed rotation. The tape selector which the change of a bias and an equalizer became independent is carried. The two-step switchable microphone attenuator of -15dB/-30dB is carried. The tension arm which stabilizes tape running is carried. It is equipped with a pause mechanism that allows for cueing. The mic input circuit and line input circuit are independent, and mic/line mixing is possible. The tape height adjuster which can finely adjust the height of the tape is carried. Equipped with a reel size selection switch that can use 7inch/10inch, you can get the optimum back tension. The line out volume is carried. It has a built-in reel lock mechanism. Monaural 1 round trip 2 hours (19 cm/s, 10 inch 740 m tape). About 2 minutes and 30 seconds (using 740m tape). 2 tracks, 2 channels, stereo/mono recording/playback. 2-track erase head x1 2-track recording head x1 2-track playback head x1. For capstan: AC servo motor For reel: Motor. 59dB (when using SLH tape). When using SLH tape. 20Hz to 35kHz/30Hz to 30kHz ±3dB (38cm/s) 20Hz to 30kHz/30Hz to 25kHz ±3dB (19cm/s). When using general tape. 20Hz-30kHz/30Hz-22kHz ±3dB (38cm/s) 20Hz-25kHz/30Hz-15kHz ±3dB (19cm/s). 38cm/s:0.04%(WRMS) 19cm/s:0.06%(WRMS). Microphone: -72dBs(0.2mV)/Low impedance line: -22dBs(0.06V)/100k. Line: 0.775V (at 100k load)/10k or more Headphones: 0.775V/8. Transistor: 58 pieces FET: 2 pieces IC: 1 piece Diode: 48 pieces. Power switch non-interlocking: 300W. Width 435x height 451x depth 221mm. 10 plastic reel No. 10 reel adapter No. 10 reel spacer connection cord (RK-74) Head cleaning rod. The item “Sony TC-7750-2 Track Reel-To-Reel Tape Recorder” is in sale since Wednesday, August 26, 2020. This item is in the category “Consumer Electronics\Vintage Electronics\Vintage Audio & Video\Reel-to-Reel Tape Recorders”. The seller is “vintage2107″ and is located in Kerava. This item can be shipped worldwide.